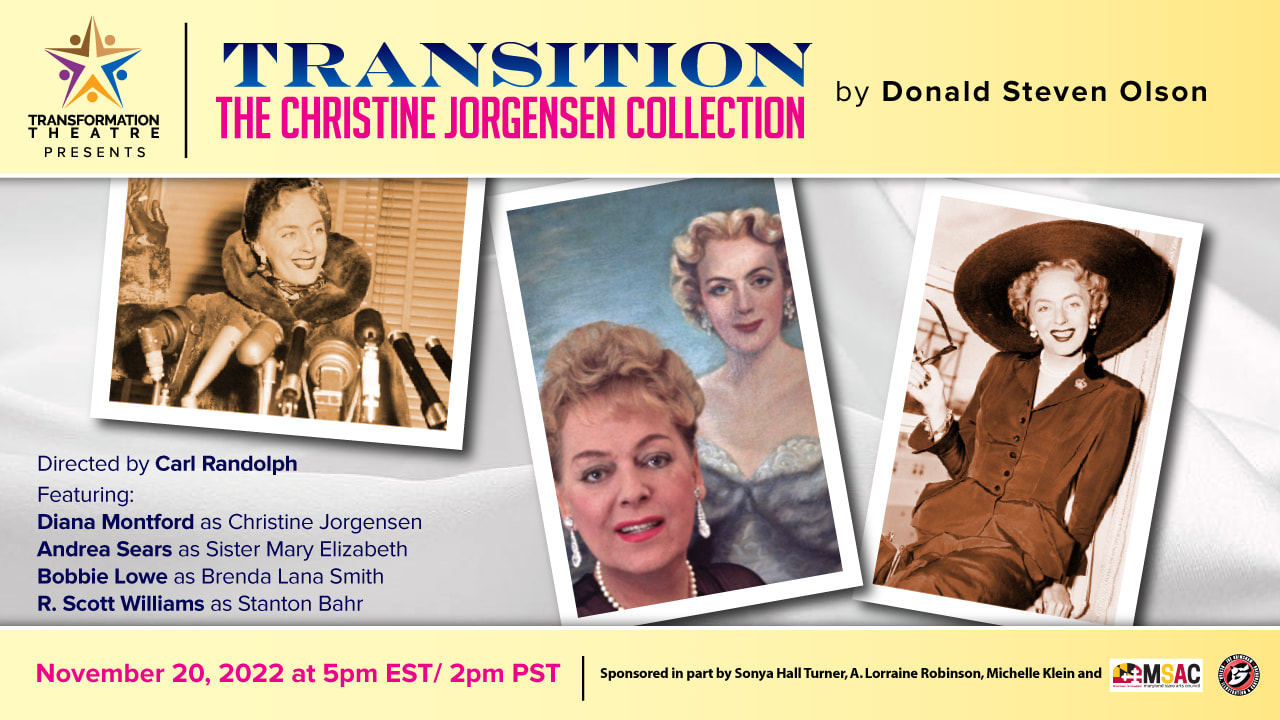 The Christine Jorgensen Collection examines the lives of three extraordinary transgender women and a gay man. Following her sex-change operation in Denmark in 1952, Christine Jorgensen became a worldwide celebrity and the first openly transsexual entertainer and public figure. Her story gave hope to thousands of other transsexual, transgender and gay people in a repressive era when sex and gender roles were strictly defined and medically enforced. 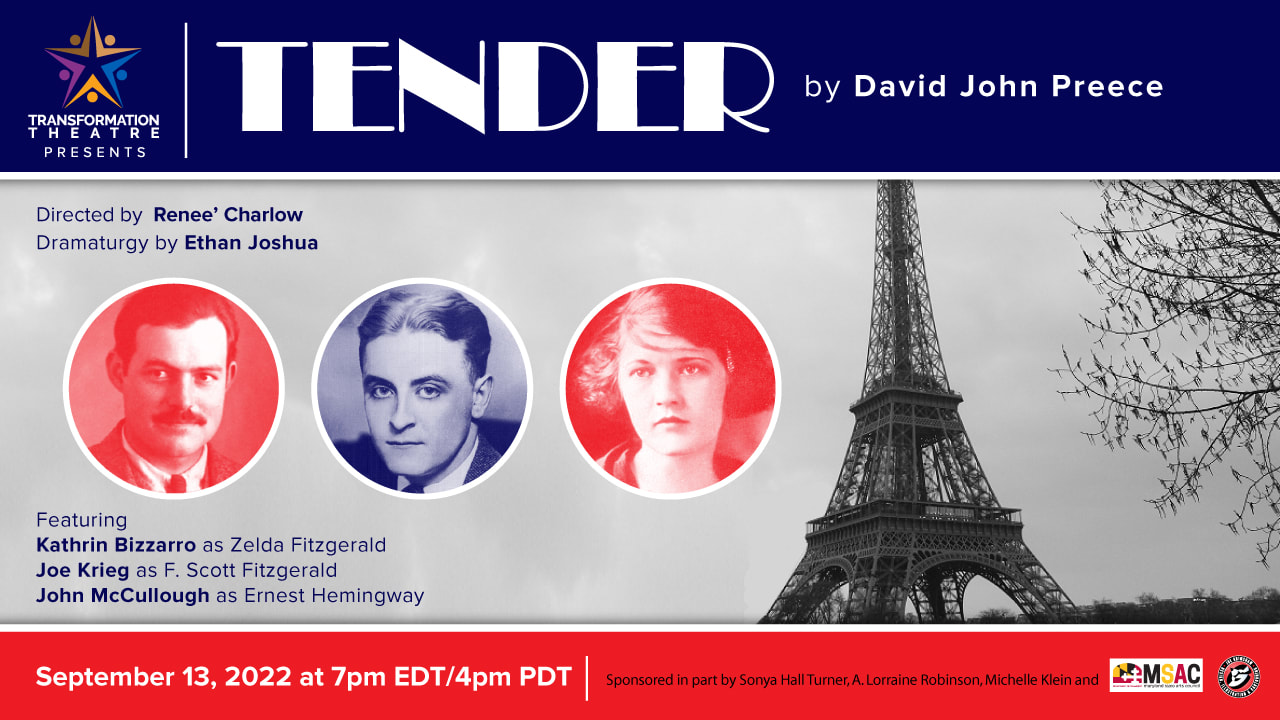 ​Tender depicts an emotionally turbulent evening that might have occurred
between Ernest Hemingway, F. Scott Fitzgerald and his wife Zelda Fitzgerald.
During the course of the evening, F. Scott placed in the position of
making life changing choices that will effect his success as an artist as he
is influenced by the obligation of his marriage versus the promise of personal and artistic
freedom. 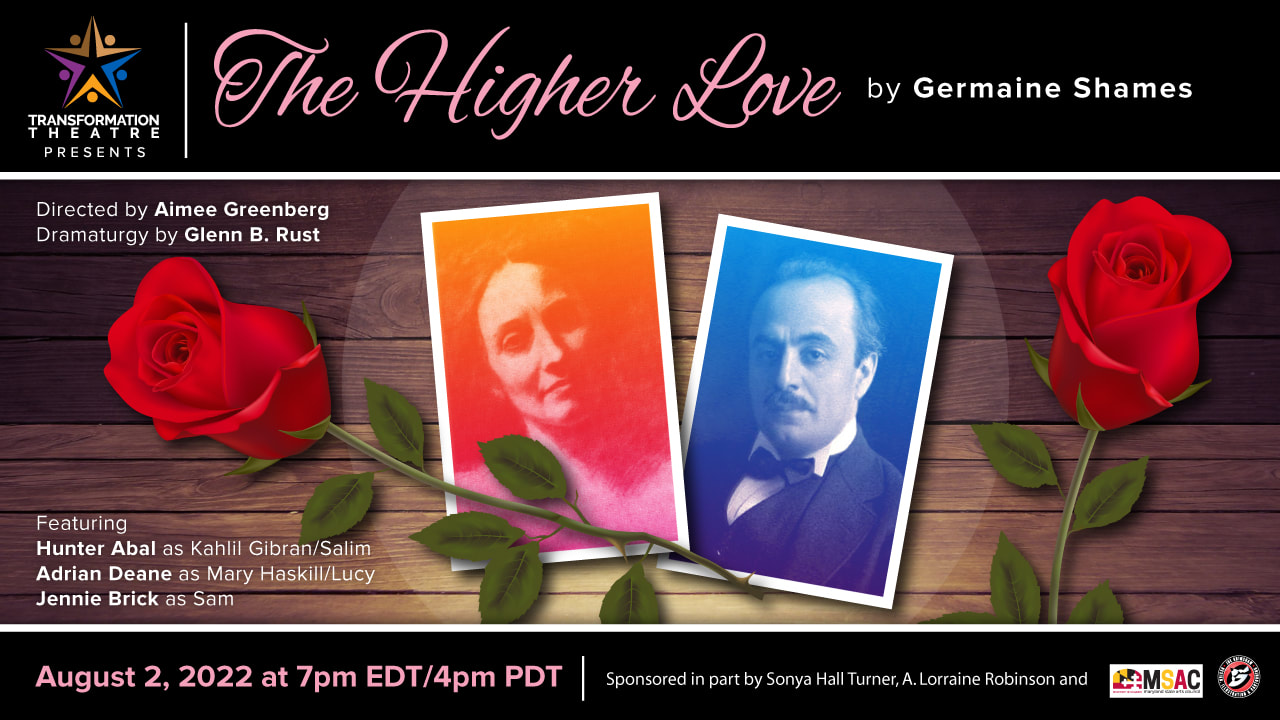 Two impressionable actors, Salim and Lucy, land the roles of a lifetime: poet Khalil Gibran and his patron, Mary Haskell. As rehearsals progress, the actors grapple with their unpredictable characters, the meaning of love, and the stage kiss to end all. Offstage, a tragedy strikes the play’s director, casting into doubt Gibran’s and Haskell’s lofty, if unrealized, ideals. From infatuation to heartache to conviction, each character is tested in his/her quest to seize the higher love. 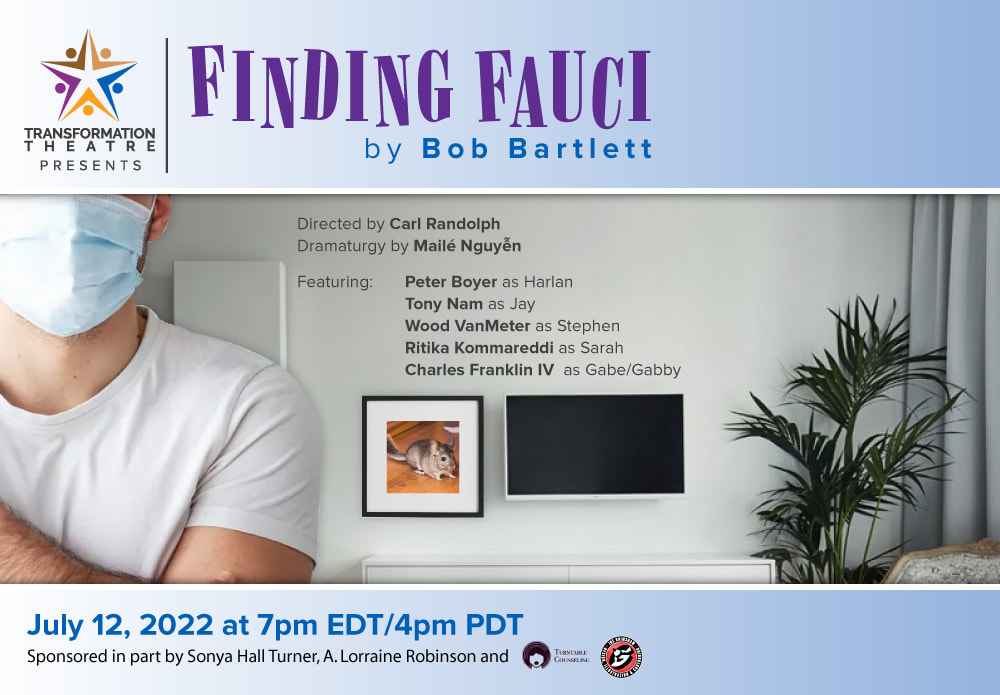 It’s been over ten years since Covid came to America and Harlan Hodgson left his tiny apartment. But when Harlan's hateful chinchilla, Dr. Anthony S. Fauci, vanishes – and twenty-something newlyweds Stephen and Sarah move in next door, the outside world like never before beckons – and Harlan hears. 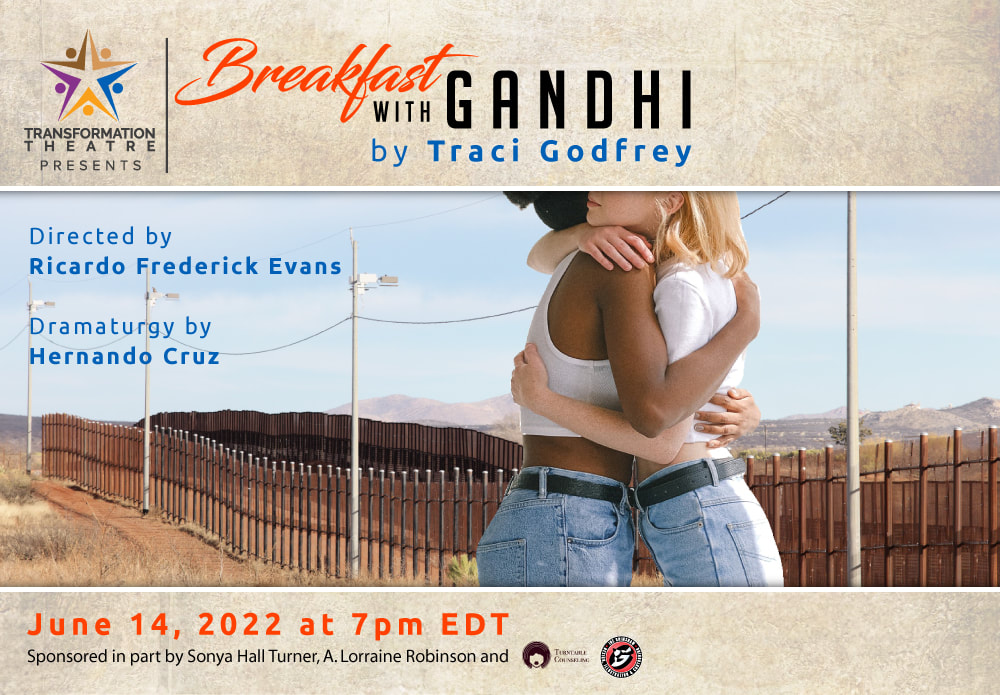 At the dawn of our collective awareness of the Global Pandemic, VAL and BROOKE have enough on their plates only to discover that the Birth Mother of their adopted sons is being held at the southern border. With the help of an unlikely friend, they go about devising a plan to help rescue the woman. 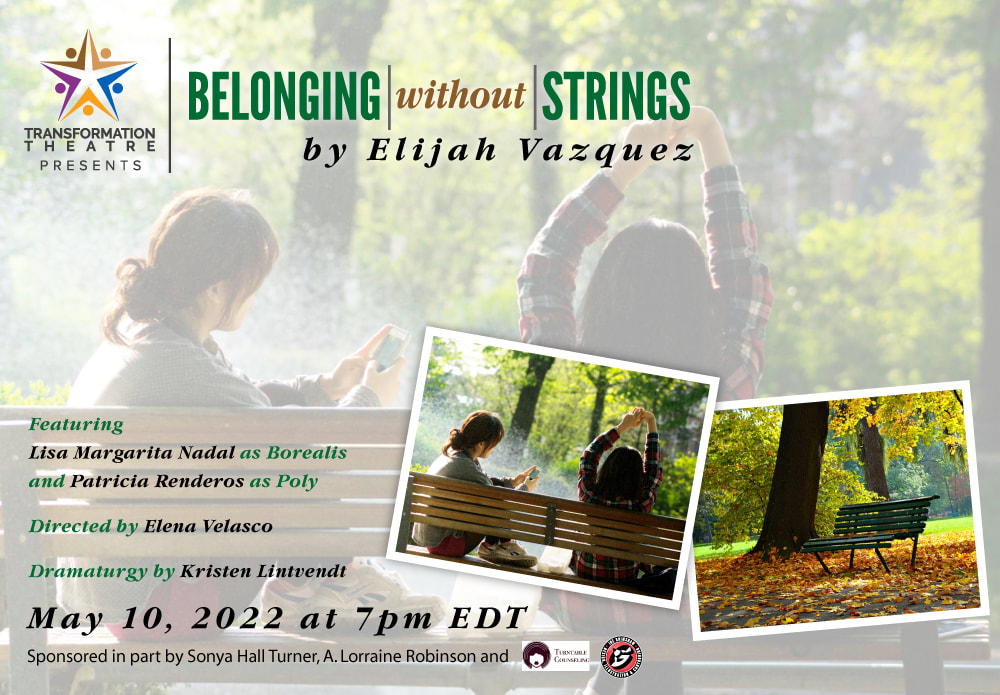 Sulking under a bundle of balloons, a woman sits on a bench. Out of the blue, another woman joins her. One of them claims to know the other, yet the feelings are not reciprocated. Through the tension of small talk, questioning and silence, many shocking truths unfold as they both try to figure out the purpose of this mysterious encounter.

Set in a queer youth center, They, Them Theirs follows Faeris, a rebellious nonbinary teen. Artistic, sensitive and volatile, they butt heads with the center's coordinator Jess, pursue a romance with fellow teen Jordan, and struggle with the admiration and expectations placed on them by the younger Raven. 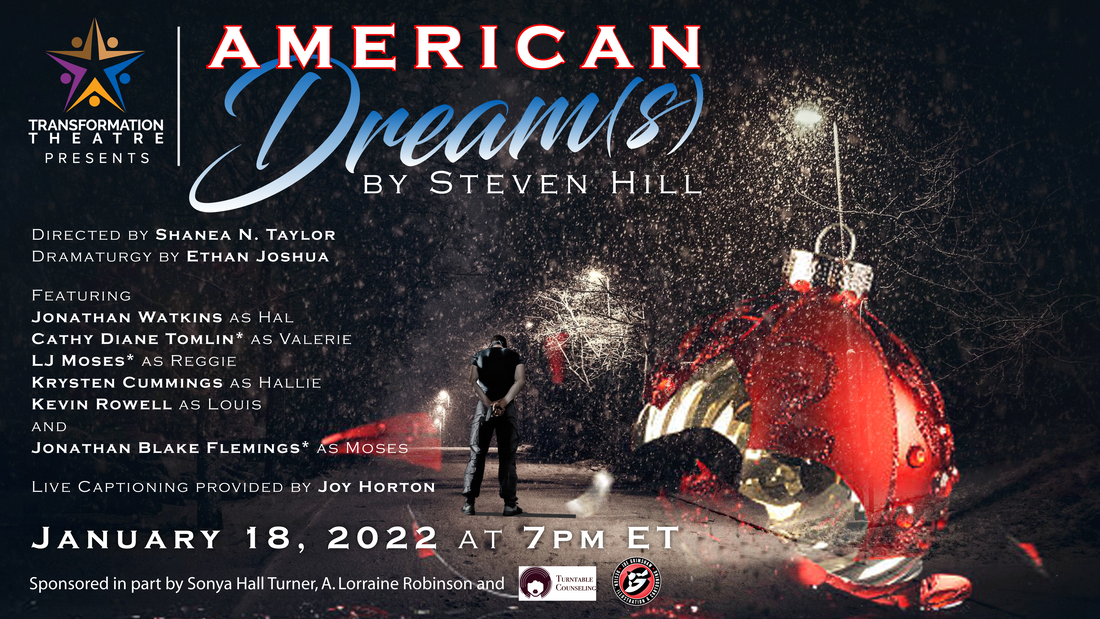 A mixed racial, working class family struggles to accept their transitioning son and brother. When he goes missing, the Armstrongs are torn by conflict. A mysterious envelope arrives during a snowy Christmas, unlocking secrets that send the family hurtling toward a bitter clash in which identity -- as well as life itself -- is at stake: can we be who we want to be? Can we love who we want to love? 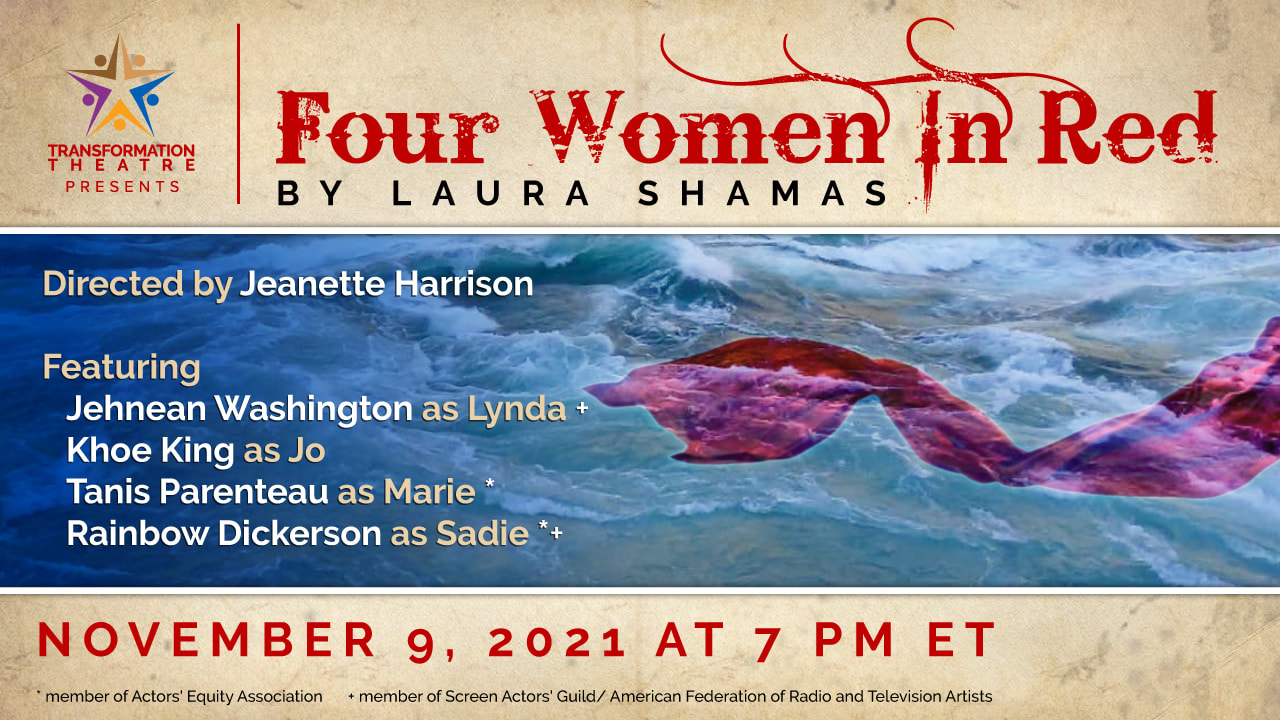 A group of four Native American women, of different generations search for and mourn Missing and Murdered Indigenous Women (#MMIW). They try to bring home the spirits of the women who have been killed.
​Red is the color that the spirits can see.

This is currently being extended from a 10 minute play to 90 minutes by playwright Laura Shamas. 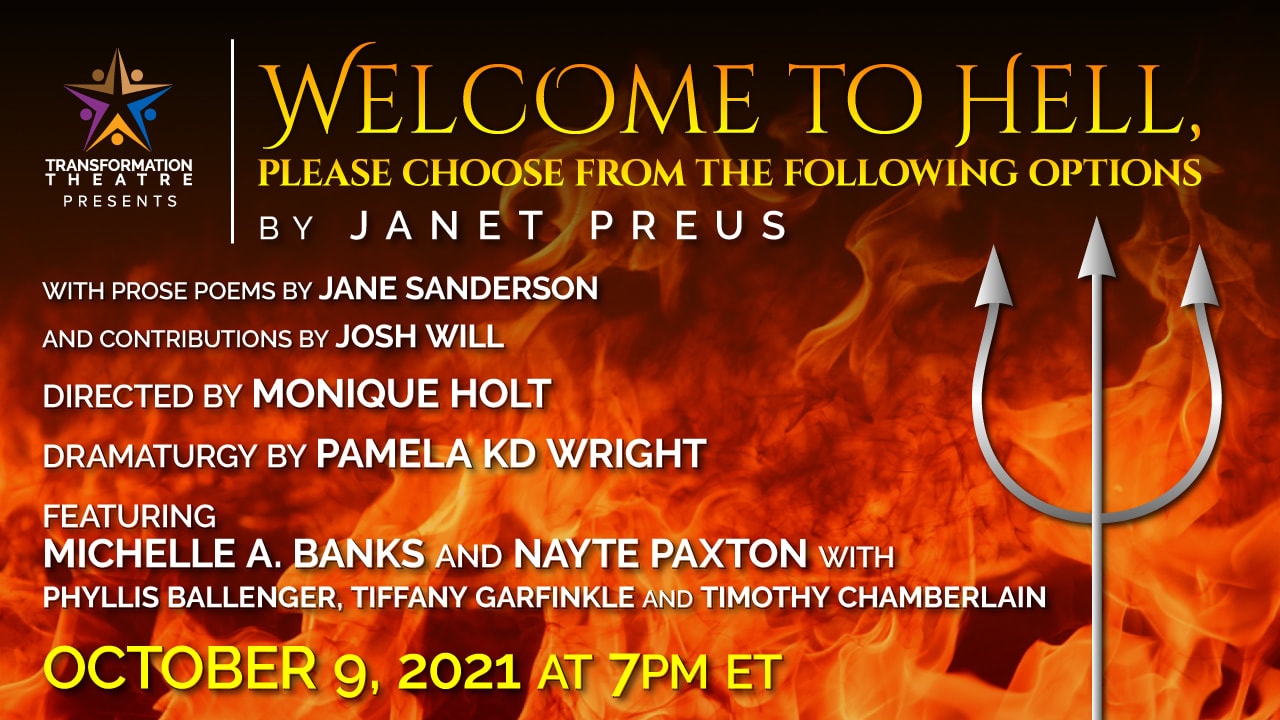 “Welcome to Hell,” the voice says. “Please choose from the following options: to speak to the person with whom you would least like to spend eternity, press 1 ...” She doesn’t know how she ended up in “Hell,” but it’s all too familiar, especially when She realizes that He is there. Shifting between absurd comedy and chilling drama, wth spins a surreal tale of a couple in “Hell” waging an endless battle with language and emotions as their weapons…until one of them finds the courage to break the cycle.

Elana Gartner talks with Mark Redfield about playwriting, and her new 2021 play “Runtime Error”, and its first public reading with Transformation Theatre in May of 2021. Interview With Elana G

Tal is trying to get a competitive internship when he approaches his college advisor and mentor for an introduction to the company. The famous Professor Carson is all too willing to make the introduction but for a terrible price. While hiding his experiences from everyone in his life, Tal tries to figure out what he could have done differently. A play inspired by the #MeToo movement and the Brett Kavanaugh hearings, Runtime Error explores similar themes for men and how they cope or don’t. ​ 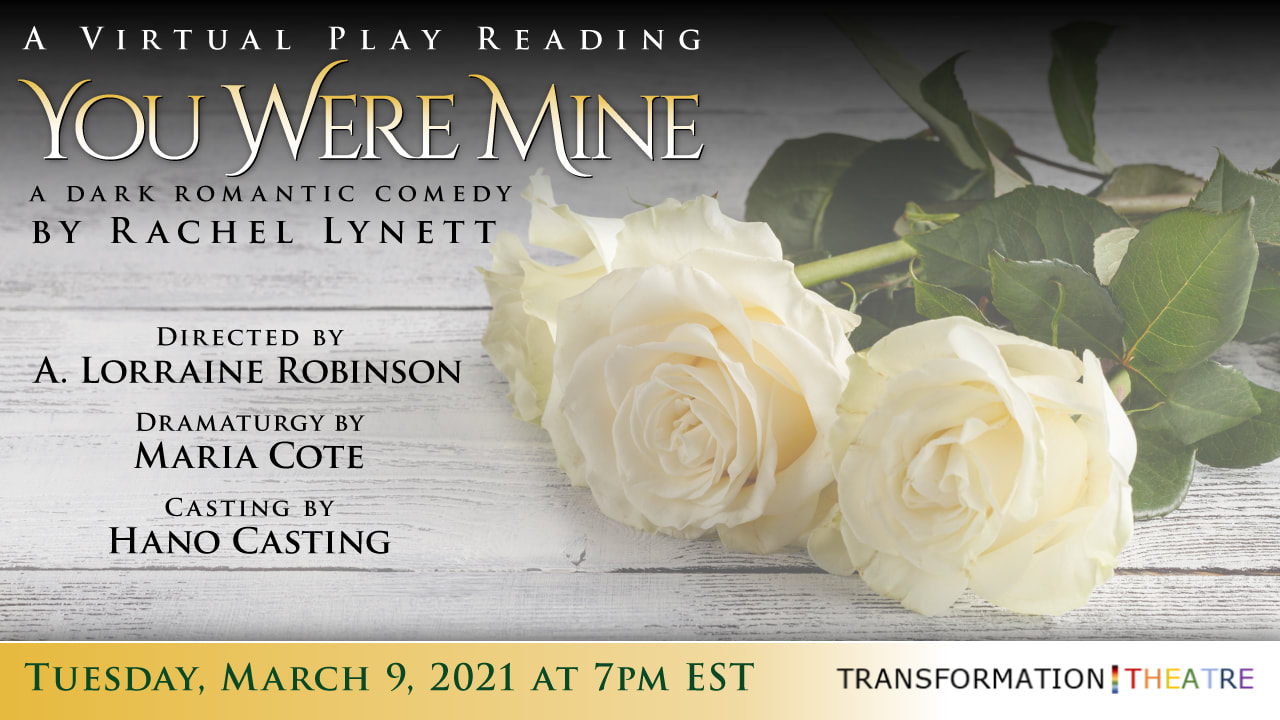 How much do we really know about our partners?  In "You Were Mine," a dark romantic comedy (by award-winning playwright Rachel Lynett), Aisling and Noah attempt to plan a funeral for their mutual partner, sharing jokes, stories, and secrets as they try to navigate what it means to actually love someone for who they wholly are. Through their collective memories they also discover how joy can transcend trauma and how love can even transcend grief.​ 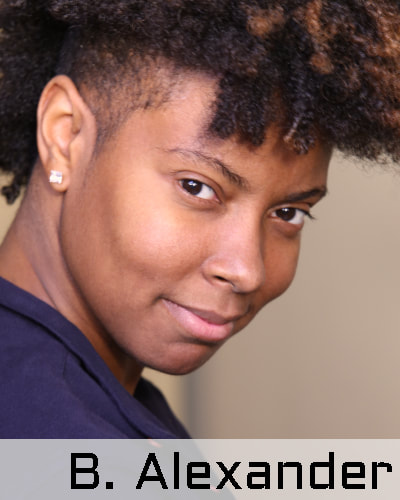 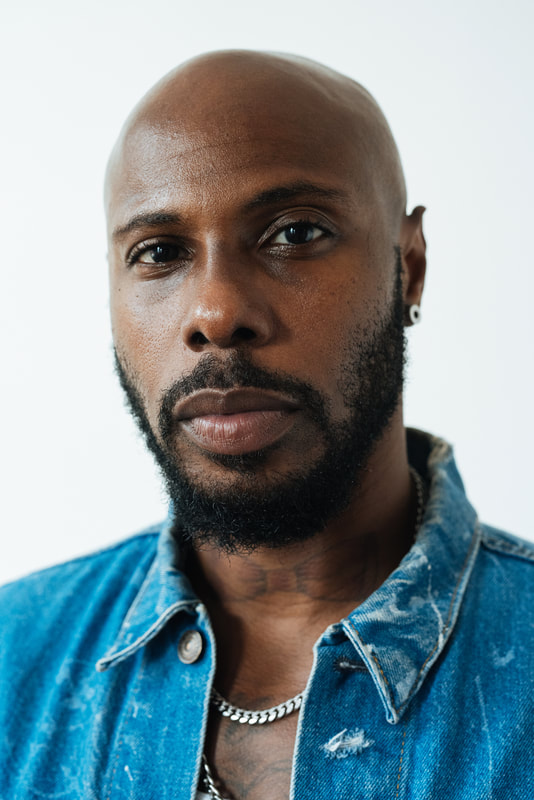 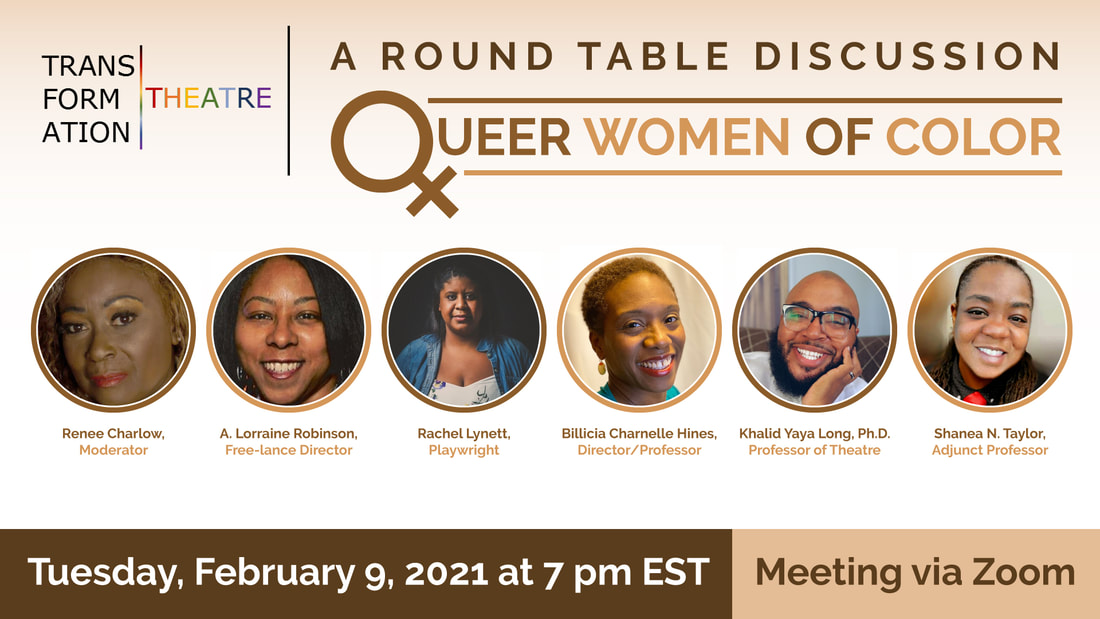 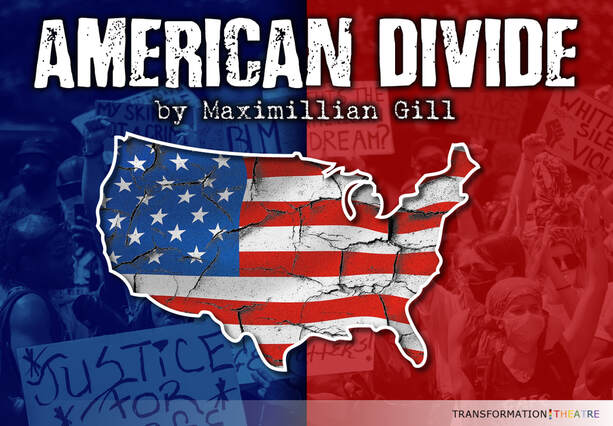 ​JAN 12, 2021 at 7:00 pm EDT
Reading of
American Divide
by  Maximilian GillDirector: Matt Ripa
Location Zoom Webinar
​Ten years from now, the nation’s political divisions have only heightened. A fascist, anti-immigrant government takes over the United States. Secession is the only option for states that want to retain values of inclusion and democracy. The east and west coasts of the United States break off and form their own republics. Civil war threatens. California closes its border to Nevada to cut off a flood of refugees. Tent cities fill up. A California police officer, a Nevada border control officer, a smuggler, and a desperate refugee meet in a bar in Las Vegas near the border between the present U.S. and a new nation. They want money, justice, or escape, but mostly they just want to survive in a world falling apart around them. 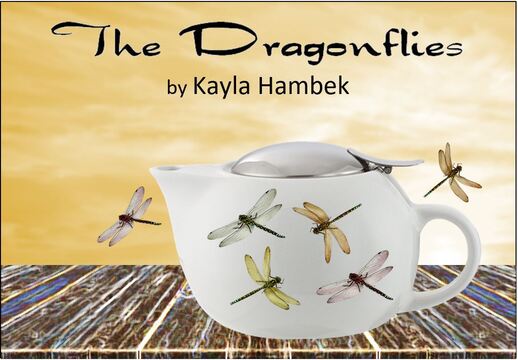 ​NOV 17, 2020 at 7:00 pm EDT
Reading of
DRAGONFLIES
by Kayla Hambek
Directed by Carl Randolph
Location Zoom Webinar
Registration Required
​
​Have you ever had someone in your life you simply couldn’t live without?  The person who knows you better than anyone else, who would walk through fire for you, but who also takes great pleasure in telling you when you’ve messed up?  For Dr. Juliet Britton, that person is Max, her best friend since college.  Juliet has always prided herself on being the smart one in their relationship, but when she is hospitalized unexpectedly, she finally asks Max for help.  Set in 2049 and told through a series of flashbacks, The Dragonflies explores how friendships change and evolve over the course of a lifetime, and the importance of finding that special person who makes life worth living. 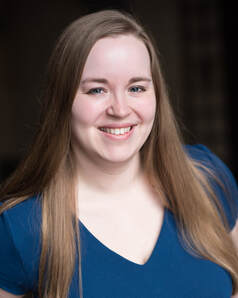 Kayla Hambek is a Minnesota-based playwright and actor whose work has been published in The Coachella Review and the Santa Ana River Review, and seen onstage in Minneapolis, MN at the Wellstone Center, Sabes JCC, Eden Prairie Players, and as part of the Minnesota Fringe Festival; in Buckingham, PA with the Town and Country Players; and at the University of Portland (OR) as part of the HAHA Festival.  Her work explores familial and other vital, non-romantic relationships through a feminist, asexual lens; plays include butterfly(n.),The Dragonflies, Persuasion, Emma Abridged, Splinter, Sprinkles, and the upcoming Miss Woodhouse Presents.  Kayla is the co-founder and Managing Director of Aethem Theatre, and has an MFA in Playwriting from Augsburg University in Minneapolis, MN. 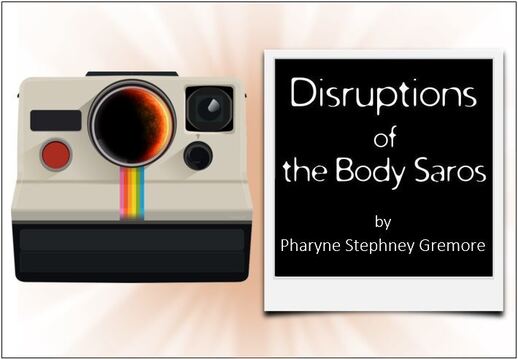 ​September 12, 2020 at 2pm EDT
Virtual Reading of
DISRUPTIONS OF THE BODY SAROS
by Pharyne Stephney Gremore
Directed by Fatima Quander
Virtual Reading via Zoom Webinar
​
A high school senior, Jade, experiences a “crisis of science” when an eclipse doesn’t occur as scheduled. Her persuasive science teacher tells her not to read into it, but as signs of death and ruin begin to appear around her, Jade fears for the safety of her twin brother, Kai, who almost lost his life during an eclipse eighteen years earlier. In a story told out of sequence, Kai tries to make sense of his place within a love triangle while Jade tries to make sense of her place within a collapsing universe.​
​ 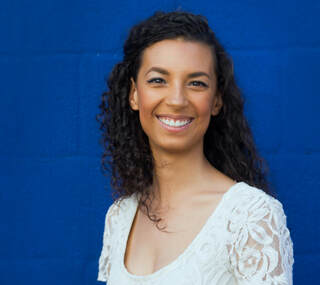 Pharyne Stephney Gremore is a proud Hoosier from Indianapolis, Indiana. In 2014, she earned a BA in Drama with a Minor in Writing from Franciscan University of Steubenville. Her play-writing debut, Theatre Games, was produced by Voice Found Repertory in 2017. Other writing credits include Built of Ivory, which was the Grand Prize Winner of Fleeing Artists Theatre's Plays of Tomorrow series. She currently resides in Bloomington, IN with her family.
​ 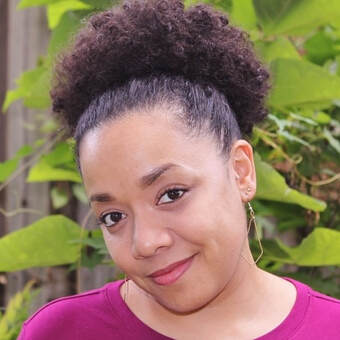 Fatima Quander (AEA/SAG-AFTRA) is excited to return to Transformation Theatre after performing in readings of These Arms of Mine and Last Catastrophist. Other credits include: directing The Burn by Philip Dawkins at Howard Community College and performing with FRESHH Inc. Theatre Company, DC Hip Hop Theatre Festival, Rep Stage, Everyman Theatre, Baltimore Center Stage Education, Theater of the First Amendment, Folger Elizabethan Theatre, Imagination Stage, and Discovery Theater; she has also performed in house and on tour with The John F. Kennedy Center for the Performing Arts. Fatima is a Senior Adjunct Instructor at Howard Community College and works as a teaching artist with a number of programs throughout the DC area including Everyman Theatre, Poetry Out Loud, Folger Shakespeare Library’s McKee Fellows and Secondary School Shakespeare Festival, Capitol Hill Arts Workshop, Sitar Arts Center, Jr. Discovery at Georgetown University, and Young Playwrights’ Theater. A native Washingtonian, she received her MFA from Actors Studio Drama School in NYC and her BA from Beloit College in Wisconsin. 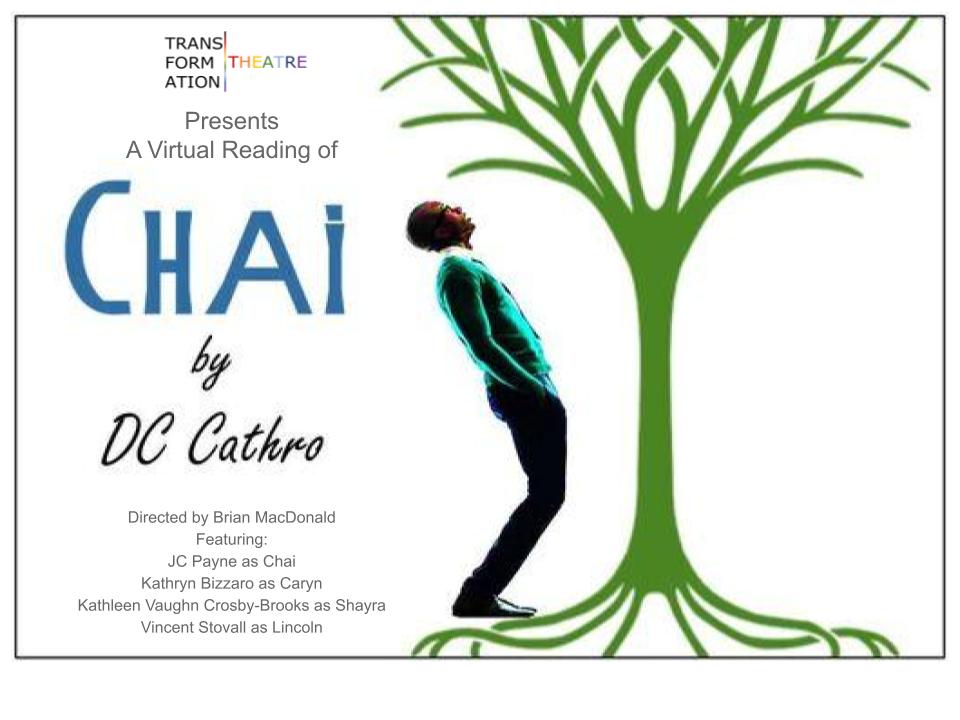 ​June 20, 2020 @ 2:00 pm EST
Reading of
CHAI
by DC Cathro
Directed by Brian MacDonald
Location Go To Webinar
Play Synopsis
“Chai” is an African American teen who hates his real name, so his girlfriend raises the money for him to legally change it. Chai's mother, however, is completely opposed to the idea. 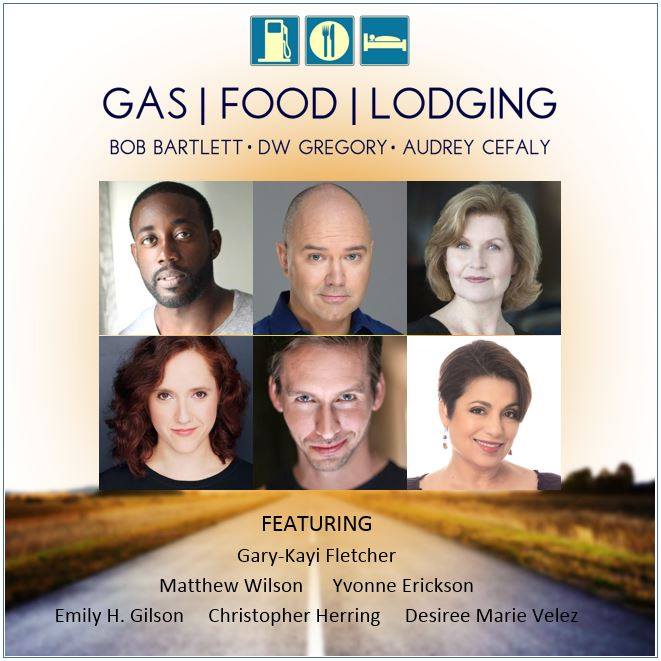 ​GAS/FOOD/LODGING (SEP 2019)
A collection of stories (Small Source of Comfort, Cage, The Magic Kingdom is Up for Grabs) set in a roadside motel near Disney World. DC/MD playwrights Bob Bartlett, DW Gregory, and Audrey Cefaly weave together tales of hapless and hopeful people in transit to the happiest place on Earth. ​ 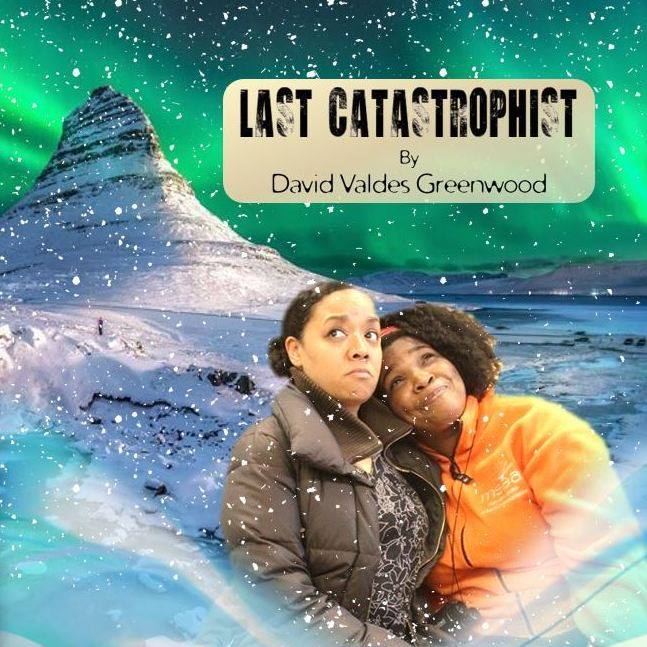 Marina, one of the last two climatologists on earth, has hidden herself on the coast of Iceland to escape increasing threats from Eternal Sunshine, a shadowy cabal harassing climate scientists into silence. When Lucia, her one remaining peer, shows up unannounced, a cat-and-mouse game ensues. Are they allies? Enemies? Who works for whom? Last Catastrophist draws on climate science and real life events to imagine life on the brink of extinction.